How US Immigrants Maintain Culture Through Food

New Jersey is an extremely diverse state, with equally colorful ethnic food to match. This project takes a look at how immigrants maintain their cultural identity through food and how they are able to stay connected to their roots though culinary traditions.

Immigrants Share Their Experiences with Ethnic Food in New Jersey

It is not uncommon to drive through a city in New Jersey and pass a Dominican restaurant, followed by a Korean barbecue that is placed right next to an Italian deli. New Jersey as a whole is very ethnically diverse, and this is very apparent through the state’s food scene. While the country is not due for another census until 2020, studies show the US, and New Jersey specifically, is getting more diverse.

Every ten years, the United States Census Bureau conducts a counting of the country’s population as outlined by the constitution. According to census.gov, the next census is scheduled for 2020, where 330 million people will need to be accounted for in the country’s increasingly diverse population. According to the 2010 census, over 1.9 million people in New Jersey were first generation immigrants. This does not include the number of second generation immigrants and beyond, and the US Census Bureau says 2020 will be significantly more diverse.

These incredible numbers impact New Jersey in numerous ways, one of which is the diverse food and restaurants that are present within the state. Many foreign restaurants are immigrant-owned or passed down through the generations from immigrant parents and grandparents. One example is how the owner of My Belizean Gourmet, Tara Hall, took over her immigrant father’s business to keep the family tradition alive.

Hall was a financial planner but left her job and began attending culinary classes at Bergen Community College to take over her father’s business in Teaneck. Her restaurant specializes in catering, and she refers to her food as a “fusion” of Belizean tradition and US influences. She emphasizes the fact that she is open to catering to any taste, always changing and adjusting her menu to find a balance of what New Jersey residents want to eat.

“It’s a way to expose people to foreign food,” Hall said. She takes classic recipes, such as chicken and waffles, and puts her own Belizean twist on them by adding coconut rum to the cornmeal batter. She makes all of her own sauces in-house and strives to have a successful business that has top notch quality control.

“I wouldn’t expect my employees to do anything I wouldn’t do myself,” Hall said, referring to all of the work that needs to be done around the kitchen. She is often cutting tomatoes, washing dishes, and working the fryers alongside her employees. She said her background in finances helped her understand the importance of having a handle on every aspect of the business, inside the kitchen and out.

“I wouldn’t expect my employees to do anything I wouldn’t do myself.”

When it comes to diversity, the official site of the state of New Jersey, nj.gov, gives an idea of who makes up New Jersey’s population. According to the website, “The population of New Jersey is racially and ethnically diverse.”

When it comes to food, My Belizean Gourmet is not the only restaurant looking to bring foreign culture to their menu. Schreiber’s Deli, also known as Schreiber’s Delicatessen, is owned by Ryan Charalambous who incorporates his father’s culture in a unique way. Charalambous’s father immigrated from Greece, and the pair took over the deli in Oradell. While is deli is certainly more American than Hall’s business, Charalambous incorporates Greek influence in his daily specials.

“I serve traditional Greek dishes, but I change the names so customers will feel more comfortable,” Charalambous said. His goal is similar to Hall’s – he wants to keep his father’s Greek tradition alive while being welcoming to locals from all backgrounds.

“A lot of Greek ingredients are expensive to import, like figs and goat cheese,” Charalambous said. He mentioned that this was a huge part of why his father decided to run an American-style deli. He and his staff also prepare lunches for the local elementary school and have a lot of regulars, creating a comfortable family-friendly American atmosphere touched by Greek influence.

While they are very different businesses, both My Belizean Gourmet and Schreiber’s Deli have similar goals in mind – to keep their country’s food traditions alive while also keeping things American.

TEANECK, NJ 04/11/2019 CULTURAL COOKING: Tara Hall poses outside of her 20 year old catering service My Belizean Gourmet, which she took over from her father. She makes use of her background as a financial planner and experience from culinary school to grow her business. -Photo by Nikki Vadas

TEANECK, NJ 04/11/2019 CULTURAL COOKING: Hall prepping food, stressing her philosophy that every business owner should be able and willing to help with every part of their business when needed. -Photo by Nikki Vadas

TEANECK, NJ 04/11/2019 CULTURAL COOKING: Hall pulls a tray of chicken out of the oven, cooked with her own unique in-house spices. Through her food she wants to share the flavors of Belize while also keeping her recipes familiar to New Jersey residents. -Photo by Nikki Vadas

ORADELL, NJ 04/11/19 CULTURAL COOKING: Ryan Charalambous poses in Schreiber’s Deli & Catering which he helps run with his father, an immigrant from Greece. They keep Greek influence present in their American-style deli.-Photo by Nikki Vadas 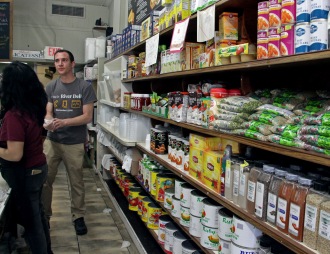 ORADELL, NJ 04/11/19 CULTURAL COOKING: Charalambous working behind the counter. He is often involved with taking orders, making sandwiches, and interacting with the customers alongside his staff. -Photo by Nikki Vadas

ORADELL, NJ 04/11/19 CULTURAL COOKING: Charalambous making an order for a turkey and cheese sandwich. While he offers plenty of American deli staple foods, he incorporates his father’s Greek ingredients. He also keeps all the names on the signs completely American, even when the dishes are from Greece, in order to maintain the American feeling of the deli. -Photo by Nikki Vadas

ORADELL, NJ 04/11/19 CULTURAL COOKING: A customer orders from the deli. Charalambous says all kinds of people stop by to get sandwiches and potato salad, but a number of people order their specialty dishes for their Greek flair. -Photo by Nikki Vadas

New Jersey has only gotten more diverse over the past decade, and while there are still months to go before the next census, it has been estimated that the state will continue on this trend. Restaurants, the food, and the owners are all continuing to branch out, and this will show on the United States’s 2020 census in the coming year.